Madison - Today Senator Ron Johnson advocated for the federal government to default on its loan obligations and for America to hit the debt ceiling by calling the only bipartisan solution "disgusting," and demanding an extreme alternative budget plan that would require deep cuts to Social Security and Medicare as the price for his support.

The damage of hitting the debt ceiling on November 3rd is catastrophic:

"Failure by the world’s largest borrower to pay its debt -- unprecedented in modern history -- will devastate stock markets from Brazil to Zurich, halt a $5 trillion lending mechanism for investors who rely on Treasuries, blow up borrowing costs for billions of people and companies, ravage the dollar and throw the U.S. and world economies into a recession that probably would become a depression." [Bloomberg, 10/7/13]

Johnson previously called on Republicans to hold the economy hostage by using the threat of hitting the debt ceiling to advance the radical Cut, Cap and Balance scheme which would make deep cuts to Social Security and Medicare. 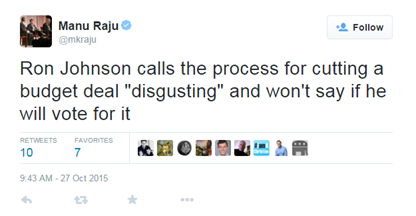 [00:12:07.06] JOHNSON: Well I think it's being revised again as we're talking about this debt ceiling.  You know, I know the conservatives in the House are kind of getting raked over the coals right now but you know I'm hearing some stirrings again of a different version of cut, cap, and balance which would be, I'm hoping they trot that out and really pretty well demand that for any kind of discussion on increasing the debt ceiling, we've got to get something for.